Warning: The data on these pages may contain spoilers for episodes you have not yet read.

Characters appeared or mentioned by name in USS GP episodes:

In alphabetical order, by surname (when applicable):

Additional information: Brought onboard by Margon, Kerr and K'Ehlen to be slaughtered for the planned feast. The 4th attendant of the feast, Captain LT, did not approve of this and disallowed the butchering of the animal. (01x02) Admiral Mullins nor anyone else at Starfleet Command is aware of a horse being onboard the Greate Pier. Aleste later got a companion; Flora. (01x07) Broke her leg when Pattison was sent out with her to scout for food, water and shelter on the desert planet they beamed down to. (02x02) 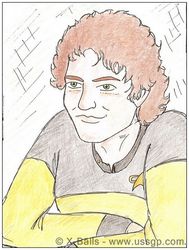 Additional information: Sustained brain damage when fighting off the Inj, just before he beamed down to the desert planet. (02x01)

Additional information: Was the prime suspect, together with Doctor Shelley and also Manco Bynes, in the murder of her close friend Charles Wedgwood, but all 3 were later cleared of all charges. (01x15) India, while riding on Flora, found a river with much needed fresh water on the desert planet. (02x02)

Additional information: The Marrdon living on the colonized planet Behlamun call themselves Behlamun, not Marrdon. They left their homeplanet of Marrdo 2 because they did not see eye to eye with the world government. (01x06)